The speckled swellshark is a species of deepwater catshark found off the coast of Northwestern Australia. Like all catsharks, they’re bottom feeders, have elongated cat-like eyes, and two small dorsal fins set far back. They’re mostly nocturnal and often sleep in groups during the day. Their diet consists of bony fishes and bottom-dwelling crustacean and cephalopods.

Very little is known of their biology. They’re presumably oviparous and can grow up to 68 cm. They’re usually found in the outer continental shelf and upper slope at depths of 150–455 m.

Their name comes from their coloring and their ability to inflate their bodies with air or water to appear larger to predators.

Do you have images or videos of Speckled Swellsharks?
Submit them to info@sharkwater.com. 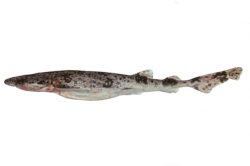