About the Spined Pygmy Shark

The Spined Pygmy shark is a species of dogfish shark in the family Dalatiidae, found widely in all oceans.

One of the world’s smallest sharks, the maximum recorded size for this species is 22 cm long for males and 28 cm long for females. This species has an elongated, spindle-shaped body with a long, bulbous, and pointed snout. The eyes are large with the upper rim of the orbit almost straight. Each nostril has a short flap of skin. The mouth contains 22-31 tooth in the upper jaw and 16-21 tooth rows in the lower jaw. Like the S. Aliae, the Spined Pygmy shark has a spine is the first dorsal fin, but no in the second one. The spine is sexually dimorphic, being typically exposed only in males and cover by the skin in females. The pectoral fins are short and triangular, with a rear margin slightly curved. The pelvic fins are long and low, and there is no anal fin. The caudal fin is broad and paddle-like, with the upper and lower slopes similar in size and shape. The coloration is dark brown to black, with light fin margins. He underside is densely carpeted by light-emitting photophores. The diet of this species consists mainly of bony fish and squid. This shark follows its prey on their diel vertical migrations, with photophores functioning as a way of counter-illumination to camouflage from predators.

The Spined Pygmy shark is aplacental viviparous, with the developing embryos being sustained by the yolk. Females contain up to 12 mature eggs but the actual litter size is much smaller. The young are born at 9-10 cm long. Males reach sexual maturity at 15 cm TL and females between 17 to 20 cm TL.

The Spined Pygmy shark is an oceanic, wide range, tropical pelagic species occurring in continental and insular land masses, sometimes over the shelves, but usually over the slopes. This species is found in depths between 200-500 m. Its distribution range goes from Western Atlantic (off Bermuda, southern Brazil, and northern Argentina), Eastern Atlantic (off France and Madeira), Western Indian Ocean (off Somalia), and western Pacific (Japan, Taiwan, and the Philippines), as well as Australia.

This species is relatively too small to be captured by fisheries and there are no identifiable threats. There are currently no conservation measures in place for this species.

Do you have images or videos of Spined Pygmy Sharks?
Submit them to info@sharkwater.com. 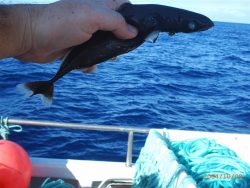