About the Spiny Dogfish

The Spiny Dogfish is found all over the world in temperate and sub-arctic waters and occasionally in the Mediterranean and Black seas. Despite the fact they were once the most populous shark in the world, the population has gone into sharp decline, primarily due to overfishing in Europe. They are commonly eaten in France and Germany and can be found in the Fish and Chip shops of Britain.

The Spiny Dogfish take their name from the mildly poisonous spines found on their dorsal fins. They can arch their back and use these spines as a defence mechanism against predators. They are estimated to live for up to 100 years and also have the longest gestation period of any known animal. It takes nearly two years to produce a litter averaging 6 or 7 pups.

As with many species of shark, females tend to be larger and reach sexual maturity at a later age. In the Spiny Dogfish, males grow to an average of 90cm and reach maturity at 11. Females grow to between 98 and 159cm and mature between 18 and 21 years. They travel in large schools, separated by sex and size and were apparently dubbed dogfish by the fisherman who observed them hunting their prey in ‘packs’.

Do you have images or videos of Spiny Dogfishs?
Submit them to info@sharkwater.com. 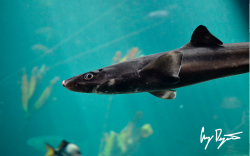