The Spongehead Catshark is a rare species of deep-sea catshark, belongs to the family of  Scyliorhinidae. Found mainly in the Pacific Ocean.

The Spongehead Catshark has a thick body and head, with a moderately long, broadly rounded snout. The five pairs of gill slits are very small as well as the eyes. The nostrils are broad with unique pleats and folds that extend above and below the throat. The two dorsal fins are about equal size; the pectoral fin is rather small while the pelvic fins are large and round. It is of dark brown colour with no fin markings. Adult species measure 51.4 cm TL and juveniles measure about 10.5 cm TL. The Spongehead belongs to the A. spongiceps species characterized mainly by their short and wide snout. They are oviparous, with one egg per oviduct. Paired eggs are laid and embryos feed solely on the yolk.

This species is bathydemersal and their distribution ranges from 572 – 1482 m deep. They occur around the insular slopes or near the bottom. Found in the Banda Sea off southern Sulawesi and the Hawaiian Islands.

Threats to this species are unknown. No conservation measures are currently in place for this species.

Do you have images or videos of Sponge-head Catsharks?
Submit them to info@sharkwater.com. 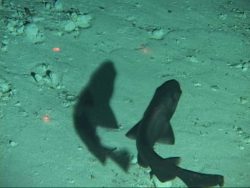