The Spotted Houndshark is a large sized shark found in the Southeast Pacific from Peru to northern Chile and around the Galapagos island. It is very rare and hence the biology is unknown. It is usually fished in Peru and Chile with other houndsharks. These sharks are often refered to as ‘tollo’ by the local people and are heavily fished. The fisheries in Peru have stopped catching tollos due to the decline in the number.

Spotted houndsharks are considered vulnerable due to the extensive fishing and high mortality. The biological aspects of this shark are unknown as it has an uncommon population and it becomes difficult to infer its trends based on other similar sharks as they have a declined population as well. However, it has been found that houndsharks are moderately early-maturing and fast-growing.

Spotted houndsharks, as the name suggests has black spots on them and generally light gray becoming white on the ventral surface. These sharks reach a maximum size of 180 to 240 cm in length. The confirm size and maturity is unknown because of its rare presence. The babies at birth measure up to 30 to 40 cm and a female could have up to a litter of 14 pups. They are usually found near the reefs and soft bottoms like sand, mud, gravel. They feed on crustaceans which are found on the soft beds.

Local fisheries are shifting away from tollo to allow populations to recover, but until further studies prove otherwise, they’re considered a vulnerable species.

Do you have images or videos of Spotted Houndsharks?
Submit them to info@sharkwater.com. 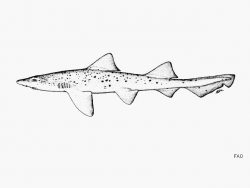