About the Spotted Wobbegong

Spotted Wobbegongs are endemic to Australia that live inshore and offshore in temperate to tropical waters at depths up to 248 m near corals and rocky reefs, coastal bays, seagrass beds, under piers and sandy bottoms.

Spotted wobbegongs have flat bodies with a dark coloured back and light circular markings that obscure their darker saddles along their back. They have nasal barbels that hang from their nostrils to taste and feel.

They can become attached to their habitats, and sometimes can also be found in shallow waters barely enough to cover them. They are nocturnal creatures that are sluggish during the day, but at night they hunt for prey such as: crabs, lobsters, octopuses and bony fish.

Similar to many animals, spotted wobbegongs will bite if they are antagonized, stepped on or if a person’s feet is near their mouth.

Spotted wobbegongs are viviparous with a litter size of about 21 and up to 37 young that are about 23 cm long at birth. They mature at about 60 cm long. The maximum length recorded was 320 cm long, but most wobbegongs are between 150 to 180 cm long.

The IUCN lists the spotted wobbegong as least concern.

In May 2008, new management regulations was introduced where a daily limit of six wobbegongs was implemented. Because of this implementation, wobbegongs are non longer targets as they have been previous to the new regulation.

In areas that spotted wobbegongs frequent, shark fishing effort is sparsely distributed and managed via time-gear input controls. In 2007, the Metropolitan Fishing Zone between Lancelin and south of Mandurah, was closed to commercial line and fillet fishing to ensure the sustainability of fish.

Do you have images or videos of Spotted Wobbegongs?
Submit them to info@sharkwater.com. 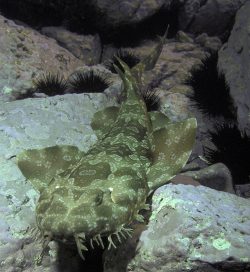