About the Pyjama Catshark

Pyjama Catsharks, also known as striped catsharks, are found off the coast of South Africa in the southeast Atlantic Ocean and the western Indian Ocean at depths up to 100 m.

This slow-swimming catshark is distinguished most by its long horizontal black stripes along its back.

Similar to leopard catsharks, pyjama catsharks also favour caves and crevices on rocky reefs and kelp beds. They are more active at hung, but will also feed during the day. They prey on cephalopods, crustaceans, bony fish, hagfishes, small batons, bivalves and bristle worms.

The IUCN lists pyjama catsharks as near threatened, but there are no conservation methods currently in place. However, the South African Sea Fisheries Research Institute is considering to decommercialize the pyjama catshark and the leopard catshark.

Pyjama catsharks are also popular in the aquarium trade because of its small size and the striped pattern on its back.

Do you have images or videos of Pyjama Catsharks?
Submit them to info@sharkwater.com. 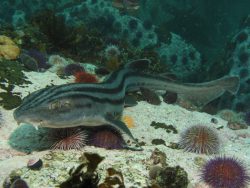