The swell shark is a species of catshark found in the Pacific, from California to Southern Mexico. There’s also a second population in Chile. Their name comes from their ability to inflate themselves to twice their body size by swallowing water.

These sharks are found near the bottom, usually at depths of about 5 to 40 m, although some individuals go as low as 400 m. They’re usually round algae-covered rock bottom crevices. They’re gregarious and are found usually in groups. They’re nocturnal and sleep during the day. They eat fish, mollusks, and crustaceans.

They are about 90 cm long, with some reaching up to 110 cm. They have flat broad heads and golden eyes. They’re brownish yellow, with black and white spots.

Swell sharks are oviparous and lay three eggs at a time. The embryo stays in the egg for up to a year and hatches when it’s about 15 cm long.

When attacked by a larger predator, it bites its own tail and sucks in water. This makes it harder to bite.

There have been reports of bioluminescence in swell sharks. This could be a method intraspecies communication.

Landings for this species are rare and their population numbers seem healthy, so at the moment the IUCN considers them a species of least concern.

Do you have images or videos of Swellsharks?
Submit them to info@sharkwater.com. 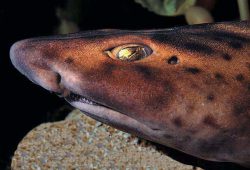 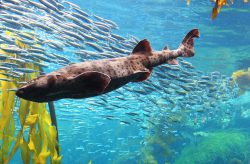 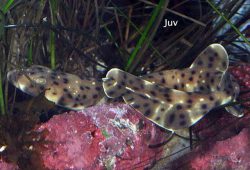