About the Tawny Nurse Shark

The tawny nurse shark is a bottom feeder found on continental and insular shelves. They are native to the Indian and Pacific oceans. They occur in places like the Persian Gulf, the Red Sea and East Africa as well as Japan and Australia.

The tawny nurse shark has a lengthy body and tail, a large bulky head, and a small mouth with small comb-like teeth. The pectoral fins are long and curved like hooks. The maximum length that has been recorded is 3.2 m while the common length of a Tawny nurse shark is about 2.5 m.

They are ovoviviparous, which means their eggs hatch inside the mother and the pups feed on unfertilized eggs. Litter sizes are usually 4 pups, and they’re born ranging from 40 to 80 cm in length. Tawny nurse sharks become sexually mature when they reach about 2.3 m in length.

Tawny nurse sharks can often be found on or near the bottom of the sea, in lagoons, or along the outer edges of coral and rocky reefs. They’re found in sandy areas near reefs and off sandy beaches. They prefer crevices and caves on reefs. They are commonly nocturnal but may be active during the day. They rest in groups often seen piled across or on top of one another. The Tawny nurse shark feeds on a wide variety of bottom-dwelling invertebrates. They are usually docile and known to allow itself to be touched but a few non-fatal attacks have been recorded.

There are currently no conservation measures in place for this species.

Do you have images or videos of Tawny Nurse Sharks?
Submit them to info@sharkwater.com. 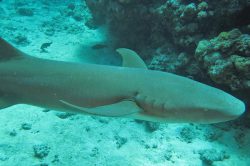 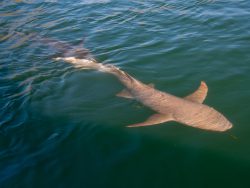 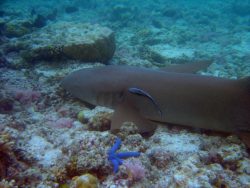