About the Tiger Shark

Tiger sharks are large sharks that can grow to over 5 m in length. They vertical stripes along its body although these stripes fade as they grow older. They have a strong powerful sense of smell and sight.

They swim all over the world in tropical and warm temperate seas from very shallow waters to about 800m deep, but typically at around 140 m and above.

Compared to other sharks, tiger sharks have the most diverse diet. They prey on tiny fish, sharks, rays, turtles, seabirds, seals, dolphins, sea snakes, crabs, lobsters, gastropods and jellyfish. They’re susceptible to baited hooks and have a tendency to consume garbage such as plastics, metal, sacks and anything that is thrown away in the sea.

They grow at a relatively fast rate. A five-year-old tiger shark is about 2 m long and by age 15 they are 3 m long. The maximum recorded age of Tiger Sharks is 50 years.

Tiger sharks from the Persian Gulf and Oman Sea have a maximum length of 750 cm. The heaviest published weight of a tiger shark was 807 kg.

They are solitary, nocturnal hunters. They have a nictitating membrane over their eyes which helps protect their eyes from particles. Tiger sharks also have tapetum lucidum which is a reflective layer behind their retinas that helps them see in low-lighting conditions.

Tiger sharks have very sharp teeth that are serrated with sideways pointing tips.

Tiger sharks are ovoviviparous. The eggs hatch within the body of the female shark. They have large litter sizes that average between 30 to 35 but can be as big as 82. Their gestation period is 13 to 16 months. Pups are born between 51 to 104 cm in length.

The IUCN lists tiger sharks as near threatened because of targeted and non-targeted fisheries. Although there are no specific conservation measures in place, the US Atlantic and the Gulf of Mexico manages tiger sharks under a Fisheries Management Program (FMP).

Tiger shark expeditions are popular in the Bahamas which allows people to swim with Tiger Sharks.

Do you have images or videos of Tiger Sharks?
Submit them to info@sharkwater.com. 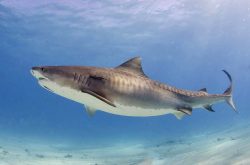 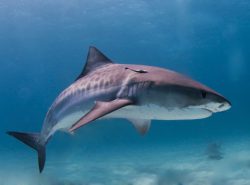