About the Whale Shark

Whale Sharks are the largest fish in the world. They can reach lengths of over 20m and weigh over 40 tons. They can be found in most of the world warm oceans except the Mediterranean. These sharks like water temperatures of over 20 degrees.

Whale sharks are harmless to humans. Their large mouth is used for filter feeding. As they swim they move their head from side to side. Their main prey is plankton but they’re also known to eat small fish and crustaceans.

Rhincodon Typus is easily identifiable by its size, the white and yellow spots in their skin, stripes on the side of its body, huge mouth at the front tip of its head, and small eyes.

They’re highly migratory and are known to travel vast distances, albeit slowly. Their average pace is about 25 km/h. Whale sharks are usually found alone, but they also aggregate in groups of over 100 individuals. The largest group ever documented had over 1000 whale sharks.

Whale sharks reach sexual maturity at about 30 years of age. Females have been found carrying over 300 pups. The pups are born about half a meter long.

Fisheries and boat accidents pose a serious problem for whale shark conservation. Some countries, such as Taiwan, have directed fisheries, while many other catch them as bycatch. They’re currently listed in CITES Appendix II, which means countries must show evidence that exported whale shark products come from sustainable populations. No country has demonstrated sustainable whale shark populations, but meat is readily available in many Asian countries. This indicates that illegal fisheries are targeting whale sharks.

Whale sharks attract tourism. Australia, Belize, Ecuador, and Mexico have legal regulated sighting opportunities. The Ningaloo Reef in Australia, the Galapagos Islands, and Quintana Roo, Mexico, are some of the most popular spots for whale shark tourism.

Do you have images or videos of Whale Sharks?
Submit them to info@sharkwater.com. 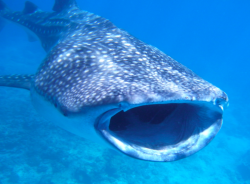