About the Whiskery Shark

Whiskery Sharks are endemic to southern and western Australia and northern Tasmania at depths of 220 m near the bottom of the sea floor. They favour rocky areas and kelp beds.

They are stout-bodied and almost hump-backed in form. The whiskery shark can be distinguished from all other members of its family by the presence of long nasal barbels (a  slim whisker-like organ near the mouth). Its two moderately large dorsal fins are similar in size.

They have a short, rounded snout, and horizontal oval eyes with nictitating membranes. They have five pairs of gill slits.

Whiskery sharks are ovoviviparous, and females have between four to 28 pups every other year with an average of 19 pups. Female whiskery sharks gestate for about seven to nine months. At birth, young whiskery sharks are 22 to 27 cm long. Pups grow fast wherein 15 to 17 months they grow to be three times larger than their initial size. The age of maturity is approximately four years for males and about six years for females.

The maximum lifespan is presumably to be 15 years. They grow to a maximum of 160 cm long.

The IUCN lists Whiskery Sharks as least concern as the population has been stable for about 30 years.

They are abundant in southwestern Australia where it is a targeted species in demersal gillnet fishery.

It was mainly caught in Australia during the 1970s and 1980s, so their population significantly decreased due to overfishing which led to a strict new regulation. Since the implementation of the regulation, it has helped increase and stabilizes their population.

Do you have images or videos of Whiskery Sharks?
Submit them to info@sharkwater.com. 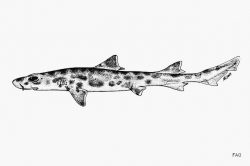