The White-saddled catshark is a species of ground shark found in the western Atlantic off the coast of Honduras, Panama and Colombia. Like all members of the catshark family, they’re bottom feeders, have elongated cat-like eyes, and two small dorsal fins set far back. They’re mostly nocturnal and often sleep in groups during the day.

They’re oviparous but the average litter size is unknown. Other sharks of the same family lay two eggs at a time so these sharks are presumed to do the same. They grow to a maximum length of 47cm. They live in deepwater and have been found at depths of  274 – 457 m.

Do you have images or videos of White-saddled Catsharks?
Submit them to info@sharkwater.com. 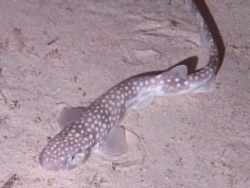