About the White-tip Reef Shark

The Whitetip Reef Shark is a species of requiem shark, in the family Carcharhinidae, and the only member of its genus (Triaenodon).  One of the most common sharks found on Indo-Pacific coral reefs.

A relatively small species, few whitetip reef sharks are longer than 1.6 m. The snout is flattened and blunt, with large flaps of skin in front of the nare that is furled into tubes. The eyes are small and oval with vertical pupils and prominent ridges above. The mouth has a distinct downward slant with short furrows at the corners. There are 42-50 tooth rows in the upper jaw and 42-48 tooth rows in the lower jaw. The first dorsal fin is positioned well back on the body, closer to the pelvic fin. The second dorsal and anal fins are large, about half to three-quarters as high as the first dorsal fin. The broad, triangular pectoral fins originate at or slightly before the level of the fifth gill slit. Like other members of the family, the whitetip reef shark is viviparous; once the developing embryos exhaust their supply of yolk, the yolk sac is converted into a placental connection through which the mother delivers nourishment for the remainder of gestation. After a gestation period of 10-13 months, females give birth to litters of 1-6 pups. Newborns measure 52-60 cm long and have relatively longer caudal fins than adults. Sexually maturity ranges 105-109 cm TL.

The Whitetip Reef Shark is closely associated with coral reefs in clear, tropical waters. Primarily nocturnal, they shelter in caves by day and often return to a home cave for periods of days, weeks or more. This species is most common at a depth of 8-40 m. In the Indian Ocean, it occurs from northern KwaZulu-Natal, South Africa to the Red Sea and the Indian Subcontinent, including Madagascar, Mauritius, Comoros, the Aldabra Group, Seychelles, Sri Lanka, and the Chagos Archipelago. In the eastern Pacific, it occurs from Costa Rica to Panama, and off the Galapagos.

Taken in line and net trawl fisheries operating in shallow reef areas, this shark has been recorded as part of the multi-species shark catch taken by fisheries. No specific management or conservation plans are known to exist for this species and it must be regarded as potentially under threat from continuing tropical multi-species fisheries.

Do you have images or videos of White-tip Reef Sharks?
Submit them to info@sharkwater.com. 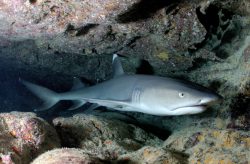 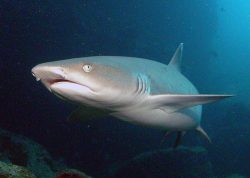 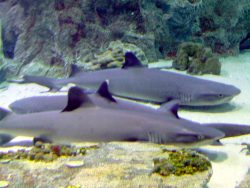