About the Zebra Shark

Zebra Sharks prefer warm temperate waters and can be found on sand, rocky or coral reefs in 26°C – 29°C waters. They rest on the bottom at about 63 m below and will swim near the surface of the water in the Western Pacific and Indian Oceans.

Adult zebra sharks have five longitudinal ridges on its cylindrical body, a low caudal fin that comprises nearly half of its total length and dark spots along a pale background. They have small eyes with large spiracles.

Zebra sharks are sluggish during the day possibly because they are nocturnal animals. They feed mainly on mollusks, but also small bony fish, crustaceans such as crabs and shrimps and sea snakes.

They may bite when provoked.

Females reach maturity at the age of six to eight years and for males is seven years. Adults can reach a maximum length of 354 cm and live over 28 years in aquariums.

Zebra sharks are oviparous. Their eggs are large, dark brown or purplish black with longitudinal striations. The size at birth ranges between 20 to 36 cm.

Zebra sharks are usually found within a narrow band of shallow coral reefs and soft bottom that is heavily fished throughout all of its range except for Australia.

The consistency of fishing in other areas except for Australia lists zebra sharks as endangered by the IUCN.

However, there are a few countries that have some conservation measures in place. In Australia, zebra sharks occur within several marine protected areas such as the Great Barrier Reef Marine Park and Moreton Bay Marine Park in Queensland. The Gulf of Papua trawl fishery in southern Papua New Guinea is managed under national laws and regulations, and there are some seasonal closures in place. Although bycatch reduction devices are not currently in place in Papua New Guinea, there are plans to implement them in the near future. Zebra sharks are also protected under the Malaysian Fisheries Act.

Do you have images or videos of Zebra Sharks?
Submit them to info@sharkwater.com. 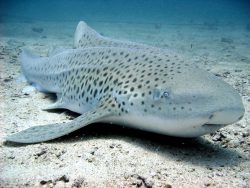 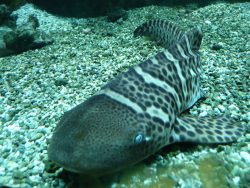