Paul Watson is the founder of the Sea Shepherd Conservation Society – an organization dedicated to research, investigation and enforcement of laws, treaties, resolutions and regulations established to protect marine wildlife worldwide. 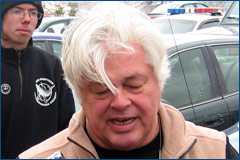 Over the years, Paul Watson has exhibited a remarkable diversity in his activism
including:

Watson majored in communications and linguistics at Simon Fraser University in British Columbia. He has lectured extensively at universities around the world, and was a professor of Ecology at Pasadena College of Design from 1990 to 1994. He was also an instructor in UCLA’s Honors Program in 1998 and 1999. Currently, Watson is a registered speaker with the Jodi Solomon Speakers Bureau of Boston, and regularly gives presentations at colleges and universities in the United States and at special events throughout world.

In 2000, Watson was chosen by Time Magazine as one of the environmental heroes of the 20th Century.