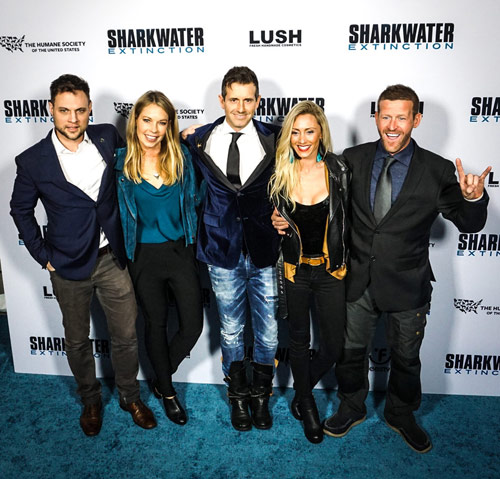 The premiere attracted a slew of celebrities, including Hayden Panettiere, who got a smooch from Rob’s adorable dog Atlas on the red carpet. Following the film, Hayden, who is known for her involvement in saving whales and the oceans, enthused, “What Rob Stewart accomplished in this beautiful film is more than most people can accomplish in their entire lives.”

Actor Stuart Townsend also thoroughly enjoyed the film, commenting, “I’m blown away. This is an incredible film that does justice the message Rob wanted to share with the world.” He posted to Instagram while he was at the premiere, telling his followers to “Check it out!”

Bo Derek, who is known for her love of animals and her efforts to save them, said, “Sharkwater Extinction is the heart and soul of Rob Stewart. The movie is very moving, and Rob’s incredible spirit and hopefulness comes through.”

Also on hand were several members of Team Sharkwater who worked on Sharkwater Extinction: Emmy award-winning cinematographer Andy Casagrande, whom you may have seen on Discovery’s Shark Week; editor Will Allen; composer Jeff Rona; SeaChange Agency founder Brock Cahill, who was one of Rob’s best friends; Julie Anderson, who co-founded United Conservationists with Rob; and Nakawe Project Founder Regi Domingo, who joined Rob on some of his most dangerous undercover adventures in the movie. Julie, Brock, Regi and Andy are pictured above.

Sharkwater Extinction is the sequel to Rob’s first film, the award-winning Sharkwater, which not only became an instant hit and an important milestone to environmentalists and ocean lovers, but its message saved countless sharks after inspiring many countries and territories to ban the importation of shark fins.

Rob felt compelled to do a follow up after he discovered that up to 150 million sharks were still disappearing each year, in spite of the bans put in place following Sharkwater. In Sharkwater Extinction, he goes on a dangerous mission behind the scenes of the illegal shark trade and makes shocking discoveries, especially after he has a number of everyday products tested and discovers sharks are being used in them, not only in cosmetics and pet foods, but in food meant for human consumption.