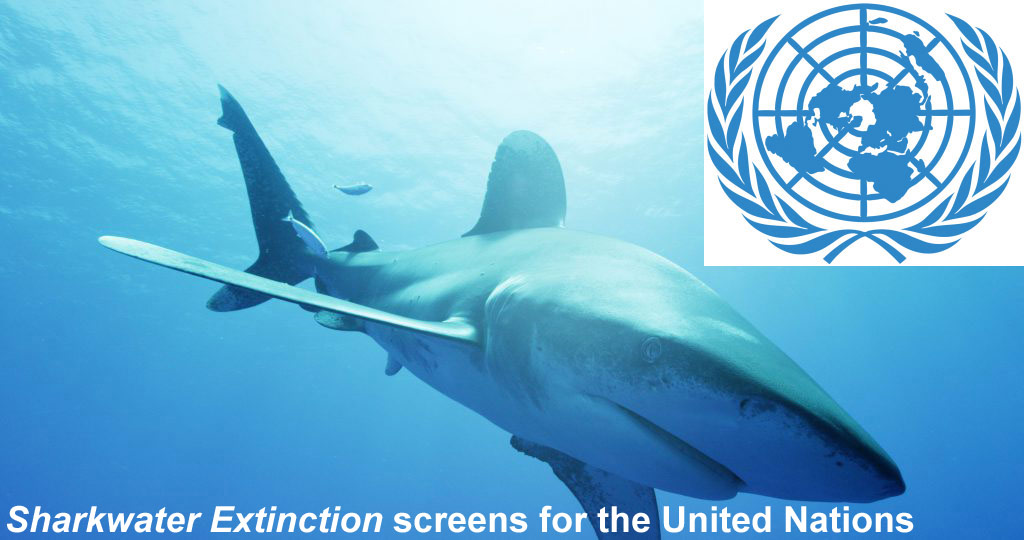 Sharkwater Extinction is an important film for shark conservancy. Sharkwater Extinction not only exposes the billion-dollar illegal shark fin industry, but also unveils the issue of shark squalene in cosmetics….Squalene is an oil produced from shark livers, and fishing fleets have decimated the deep sea sharks in the North Atlantic off the coast of Europe.  The Rob Stewart Sharkwater Foundation has been working with cosmetics and personal care manufacturers across the globe to remove shark ingredients from these products, and replace them with squalene manufactured from olives, a readily available replacement.

Following the screening, two of the film’s producers, Sandy Campbell and Brian Stewart, and wildlife experts from across the world including Jessica Battle, Senior Global Ocean Governance and Policy Expert at WWF; Susan Gardner, Director of the Ecosystems Division at UNEP and Tom De Meulenaer, Chief of the Secretariat’s Scientific Services Team at CITES; came together to discuss the film and how to conserve our oceans.

Of course, sharks were at the center of that conversation. Sharks are a complicated species, and many don’t understand their importance to biodiversity within oceans. Up to 150 million sharks are killed per year for the shark fin industry, according to Tom De Meulenaer, and Brian Stewart also pointed out that many of those species can be found on the endangered list. Shark ingredients are now routinely found in products for human consumption, pet foods, fertilizer, fish and livestock feed and cosmetics.

Biodiversity is important. “Sharks are a key species because they manage the populations of fish below them,” Sandy Campbell explained. When sharks are removed from an ecosystem, it affects other species and this can badly affect communities. In the Canary Islands, where sharks have been fished out, smaller fish can now swim into deeper waters farther from land with no fear of encountering sharks. “The overfishing of sharks allows fish to travel further out to sea where fishing boats can’t go, they can’t afford the gas. This results in a lack of income and a lack of protein source for coastal communities.”

This is an issue that can be solved. The panelists all agreed that with the right education and awareness strategies, biodiversity loss could be stopped. From mislabeled shark products and education for consumers to understanding the problems of overfishing and illegal trade, and even programs to help educate children about their environment, the more people know, the more likely they are willing to help save our oceans. ~Brie Davis