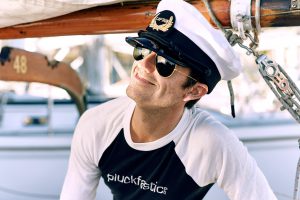 Brock Cahill, Founder of SeaChange Agency first became aware of Rob Stewart when he saw the iconic photograph of Rob freediving with sharks. Shortly after that, he saw Sharkwater (2007) and it it inspired him to reach out to Rob and thank him for his pioneering efforts. Not long after that they became friends. Cahill and Stewart travelled to remote diving areas to find pristine blue water, in order to swim and photograph the elusive sharks. Brock and Rob were dive partners for the better part of ten years, and spent countless hours strategizing how to change the world, and save the ocean. Soon thereafter, Cahill founded the SeaChange Agency, a non-profit organization in 2010. It harnesses the collective power of the yoga and conscious community toward ocean conservation.

Stewart was a mentor to Cahill and encouraged his path into activism and oceanic preservation.
Stewart is listed as a founding member, and served on the board of directors for many years. He continually reminded Brock that the camera, not the shotgun, is the greatest weapon that they have in the revolution to save humanity, and the world at large.

Brock is a Cinematic Activist and Preservation Tactician, aligned with the Intent of Nature, for The SeaChange Agency and Team Sharkwater.