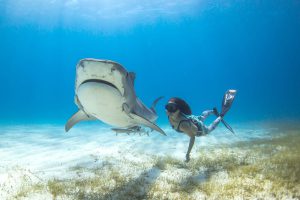 Australian Madison Stewart was featured in Rob Stewart’s Sharkwater Extinction. No relation to Rob, she describes herself as a “tech diver, filmmaker, and well rounded misfit” but she’s so much more. She founded Project Hiu, a Nonprofit Organization that transitions shark fishermen to shark tourism.

Madison realized at a young age that she loved sharks. In fact, she calls them adorable. Growing up on Australia’s Gold Coast, Madison became a certified Open Water diver at 12. She was filming sharks underwater by the time she was 14, having noticed the drastic decrease in shark populations. When she realized there was a legal shark fishery inside the Great Barrier Reef that harvested 100,000 sharks a year, Madison knew she had to act before all the sharks were gone.

The documentary Shark Girl followed Madison’s mission to protect sharks. She’s also been in Julie Barnes’ Sea of Life and will appear in the upcoming Envoy: Shark Cull. She says, “I always knew I wanted to get into film but never knew it could be a tool for conservation. Before Rob I enjoyed the ocean but never saw my potential to fight for it and take responsibility for it. I would say 100 percent Rob inspired me.”

Just 27 years of age, she’s already done so much to help sharks and the environment and for that, we want to shine the spotlight on International Women’s Day (March 8, 2021) on the super incredible Madison Stewart! ~Alexandra Heilbron